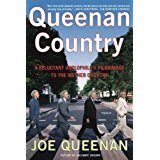 In an August 2016 entry for this blog, I linked to CNN’s “15 Funniest Travel Books Ever Written (in English).” Queenan’s nicely punning title came in ninth on the list. As I love humor in travel writing, and Joe Queenan can be funny, my expectations for this book were high.

As Queenan explains in his introduction, he is married to an Englishwoman, and he has been to Britain many times, often visiting her relatives. In 2002, he decided he wanted to go on his own. The British had always baffled him, he says, and he wanted to figure out what made them tick. Queenan Country, published two years later, he calls “the confessions of a reluctant Anglophile,” a narrative expressing his feelings toward the British, both positive and negative. “Ultimately,” he writes, “I wanted this project to be a cross between a valentine and a writ of execution, an affectionate jeremiad, if you will.”

Queenan’s six-week tour therefore focuses less on Britain than on the British, whom he often contrasts with Americans, shooting barbs at both. He does travel—breezing through Liverpool, Durham, Edinburgh, Glasgow, and other places, offering humorous historical synopses and commentary as he goes. But his interest lies in British character and customs.

The British are easy to make mock—they have served many a satirist well—and the earlier part of the book has some very funny lines. As you’d expect, many of his points take aim at English eccentricity. “When I first read Lewis Carroll’s Alice in Wonderland in my teens,” he says, “I interpreted it as a chimerical fantasy about an innocent young girl who disappears down a rabbit hole and enters a phantasmagoric society populated by lunatics. Not until I married an Englishwoman and started visiting Old Blighty did I realize that Carroll was merely describing Britain.”

Queenan also takes on other topics, such as British tweeness, dowdiness, love of ambiguity (a concept “the British people invented”), and their tendency to go overboard. “Enough is never enough. The Brits can never leave well enough alone,” he says, contending that they will create numerous myths when one alone would do. “Here’s a question worth pondering,” he writes. “Is there any place in Britain where Arthur isn’t buried?...For someone who almost certainly never lived, King Arthur turns up in an awful lot of final resting places.”

Over time, though, Queenan Country doesn’t hold up well. The author is guilty of the very flaw he ascribes to the British: the tendency to pile it on. Unable to declare enough enough, he offers umpteen examples (of varying quality) to show some point, when a couple of really pertinent ones would have been stronger.

And increasingly the barbs, rather than sharp, seem merely unpleasant, and they are often irrelevant, as if flung rather than aimed. Do we really need to know that Queenan doesn’t think highly of Billy Joel? Do we care about the salesman who claims—wrongly, Queenan is sure—that the blue boots he wants don’t come in his size? Much of the book sounds like venting. If Queenan’s purpose was to write “an affectionate jeremiad,” he seems to have misjudged his tone. Somewhere along the way the affection disappears, and with it the humor. The Brits, so good at sharp humor, deserved better. Readers deserved better as well.