Review: The Lost City of the Monkey God 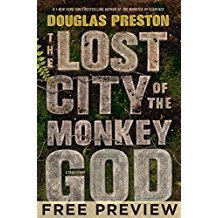 For centuries a legend flourished about a lost city located somewhere in the Mosquitia region of Honduras: Ciudad Blanca—the White City—or the City of the Monkey God. Although the dense rain forest made exploration a challenge, various artifacts discovered in the area seemed to reveal a culture unknown to researchers. Adding to the mystery, indigenous people believed that the city was cursed: anyone who entered this “forbidden place” would die.

Did this city even exist—or was it just a myth? Douglas Preston first became interested in the subject in 1994, when, while working on a different article, he learned that new sophisticated radar technology could penetrate jungle foliage to reveal what lay beneath and that someone was planning to use it to find the White City.

Preston contacted that “someone,” and by 2012, he had joined a team flying over the Mosquitia region using lidar—Light Detection and Ranging—to map out what might be buried in the rain forest. In 2015, as a correspondent for National Geographic magazine, he joined a second expedition which, using the maps they now had, would explore the area on the ground.

Spoiler alert: the group did find the remains of an extensive and previously unidentified civilization, and many from the team subsequently became gravely ill. Exactly what they found remains to be studied. And whether or not the illness that afflicted them was “the curse of the Monkey God,” it can be said with authority that it was leishmaniasis, a ghastly disease.

Preston covers the many aspects of his story thoroughly. He discusses earlier attempts to find the lost city; the role of the Honduran government; the battles among archaeologists over using lidar versus “ground truthing”; and the many issues that arise over preservation of the site, conservation of the land, and drug trafficking. Mainly, of course, he offers a detailed chronicle of the expedition and its participants, as they struggle with the terrain, climate, heavy rains, wildlife—notably, the fer-de-lance, a deadly snake—and reflect upon the strange artifacts they uncover.

Although the expedition’s discoveries, intellectually and historically, are exciting, I didn’t find the story, as told, gripping. The most engrossing section, I thought, was Preston’s description of leishmaniasis and the toxic treatment it required. But as reportage, the book is excellent. The Lost City of the Monkey God is a reminder that exploration, often said to be no longer possible, is by no means finished—though, as ever, it can come with a cost.