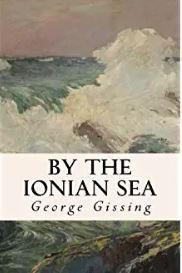 He searches for the Galaesus, Horace’s “beloved river,” and in Metapontum, he thinks of Pythagoras, said to have died there in 497 BC, “broken-hearted at the failure of his efforts to make mankind gentle and reasonable.” Gissing observes that “In 1897 AD that hope had not come much nearer to its realization.” Nor in 2018, this reader would add.

Beyond the allusions to classical history, Gissing describes the daily experience of his trip, vividly recreating scenes—the albergo filthier even than the other filthy albergos with its inedible food and its swindling innkeeper; the surprise of a tasteful building that turns out to be an abattoir; the restaurant where two military men enter together but sit at different tables conversing by shouting across to one another.

Present and past converge dramatically when Gissing falls ill in Cotrone and, in the grip of fever, hallucinates ancient scenes in detail—“great vases,” “sepulchral marbles,” “halls of feasting,” even Hannibal’s soldiers. “The delight of these phantasms,” he says, “was well worth the ten days’ illness which paid for them.”

By the Ionian Sea is, as its title makes clear, the story of a ramble—“a walk for pleasure.” Leisurely, erudite, and quirky, it offers readers a journey not only into the classical and 19th century past, but also into the past of travel writing.