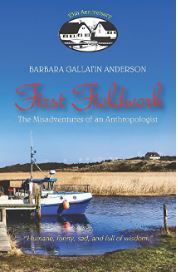 For all that she was an observer, Anderson also knew that she was being closely observed, and that in Taarnby, as in any small town, her errors would be widely known with incredible speed. Not surprisingly, with no previous knowledge of customs and only a phrasebook knowledge of Danish ("Give my regards to your aunt and uncle"), she made many errors.

In hilarious vignettes, she describes destroying a meatloaf (with sugar!) in a local cooking class run by "Talia the Terrible"; bursting out with a completely inappropriate expression of thanks at one of the village's ubiquitous coffee hours (translation: "That tasted goddamned good!"); and offering garbled praise to a hostess that comes out as "Thank you for the snack.  It was lovely and almost enough."  She figures the villagers consider her a dolt.

Anderson does an excellent job conveying the strains of her situation while also revealing the gradual changes that take place as she becomes increasingly accepted in Taarnby.  That her daughter is so comfortably part of the children's network helps: the village cares enormously about its children, taking them in and feeding them as they appear at kitchen doors. This growing acceptance leads to a poignant scene where Taarnby greets Anderson and her new baby with a banner that says, "Welcome to our adopted daughter!"

Organized by theme—"Culture Shock," "An Ethical Issue," "Acculturation: The Enduring Cold"--First   Fieldwork offers insight into the anthropological process, and I'm sure the book would be extremely helpful to any anthropologist heading out to the field—if they still do fieldwork these days.  Indeed, I wish my husband and I could have read it before heading off to New Guinea.  We might have realized—as Anderson intends—that the messiness on the ground doesn't necessarily preclude the possibility that a well-organized monograph might follow.

But it is as a travel book that I recommend First Fieldwork.  Anthropological fieldwork is, after all, a particular—and peculiar—form of travel, and Anderson captures it with intelligence, self-awareness, and a marvelous sense of humor.