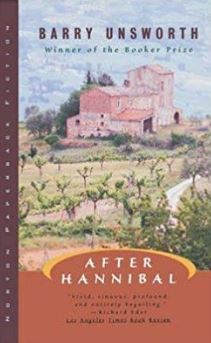 Through two foreign couples, Unsworth looks at incomers restoring old houses in Italy, a subject adored by many readers that receives some tough treatment here.  The Chapmans, an English couple—coarse Harold and art-loving Cecilia—get into a dispute with the Checchetti family and ultimately with each other; while the American Greens, guileless retired art teachers, are taken in by the fraudster Stan Blemish  (whose name says it all) and watch the restoration process demolish their house, their savings, and their dream.

In the middle of all of this—or, rather, quite above it—presides the lawyer Mancini, a Machiavellian figure whose large head, waxen fingers, and ageless demeanor fascinate.  As he counsels the Chapmans, Fabio, and the Greens, he assesses everyone, observing how Fabio, like so many of his clients, armors himself "against the lance of blame," and how the Greens will always be innocents.  "The drama of deceit and belief goes back to the Garden of Eden," he says, "and lawyers have been living on it ever since."

Remote, detached, deeply philosophical, Mancini listens carefully to all difficulties and arrives at intricately shrewd solutions.  Is he God or Satan?  Cynical or clear-eyed?  Whichever, he is an endearing, wonderfully entertaining character, Italian to the core.

As in his travel book, Crete, which I reviewed several years ago, Unsworth's descriptions here are excellent, and he writes perceptively about the art appreciated by some of his characters, if not all.  ("Fuck Raphael!" cries Harold Chapman.)  And though fiction, After Hannibal does offer pragmatic wisdom for travelers as well:  I am sure that anyone who reads it will think at least twice before deciding to restore an old house in Italy.