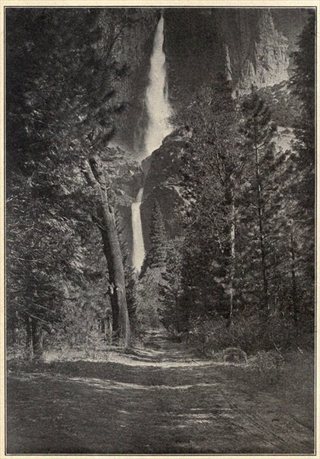 This after all is the great naturalist John Muir—future co-founder of the Sierra Club, who helped establish Yosemite as a national park—writing about his first exploration of a region that would fill him with passion for his entire life.

In June 1869, Muir, eager to explore the California mountains and lacking the means, managed to find employment with a sheep-owner, Mr. Delaney, who hired him to accompany a shepherd, his helpers, and 2500 sheep to the cooler pastures of the Sierra. That Muir, as he admitted, wasn't knowledgeable about either sheep or the terrain, didn't matter to Delaney, who had faith in the man and his future fame and was happy to support his studies.

My First Summer in the Sierra is a journal of this expedition, a lively chronicle of their progress and a detailed description of the plants, animals, and rocks Muir found on his journey.

Muir doesn't think much of the sheep, whom he designates "horned locusts" or "woolly locusts."  In various comical scenes, he mocks their aversion to water—an aversion so intense, they refuse to cross even shallow creeks, though in fact they can swim.  And of course they aren't wild.  He worries that these domesticated animals, unlike wild creatures, will damage the landscape they're passing through—an issue that he will pursue later in his career.

But if he is critical of the sheep, he loves pretty much everything else he finds—the Douglas squirrels ("of all Nature's wild beasts, they seem to me the wildest"),  the "noble" sugar pine ("an inexhaustible study and source of pleasure"), the lilies, the ferns, the extraordinary rock formations at Yosemite and the waterfalls where—against his better judgment—he makes some risky moves to attain the very best view.

"How interesting everything is!" Muir says.  And that is the key to the man and to this book, which seems to me a wonderful guide to attentiveness.  This, I thought as I read, is the way to be in nature.