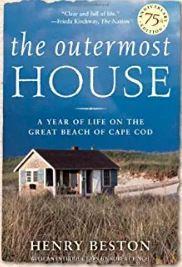 The Outermost House: A Year of Life on the Great Beach of Cape Cod is the story of that year.  As the book's subtitle makes clear, this is not just an account of Beston's own life during that year; it is a descriptive and dramatic narrative of changing life on the beach as the year progresses.  "A year indoors is a journey along a paper calendar;" he writes; "a year in outer nature is the accomplishment of a tremendous ritual."

Engaging fully with his environment, Beston describes the wildlife, especially the birds, the sand and surf, the smells and sounds.  He writes admiringly about the coastguard men who patrol the beach and are his only human companions, about the brutal blizzards, and about the boats that break up and the men who die.  He also recreates his personal life, as he goes into Eastham for supplies, walks the beach, hauls in firewood, endures a storm in which he himself almost dies.

Over time the book has been extremely influential and is now considered a classic.  As noted on the website of the Henry Beston Society, "it is considered to be one of the seminal works of today's environmental movements" and, in the words of the former governor of Massachusetts, Endicott Peabody, "it is one of the reasons that the Cape Cod National Seashore exists today."

In his excellent introduction, Robert Finch—who has himself written about Cape Cod (The Outer Beach: A Thousand-Mile Walk on Cape Cod's Atlantic Shore)—observes that Beston, despite his "canonization" by conservationists, was not a trained scientist or an "expert field-naturalist."  He thought of himself mainly as a writer, and The Outermost House is beautifully written.  Although I found the prose at times too self-consciously "poetic," its images are evocative and sometimes exquisite.  I especially enjoyed Beston's reflections on nighttime, with which, he laments, we have fallen out of touch.

What struck me most throughout the book was the author's respect for animals, whom he refers to as "peoples".  I found the following passage especially intelligent and powerful:

"We need another and a wiser and perhaps a more mysterious concept of animals...We patronize them for their incompleteness, for their tragic fate of having taken form so far below ourselves. And therein we err, and greatly err. For the animal shall not be measured by man. In a world older and more complete than ours they move finished and complete, gifted with extensions of the senses we have lost or never attained, living by voices we shall never hear. They are not brethren, they are not underlings; they are other nations, caught with ourselves in the net of life and time, fellow prisoners of the splendour and travail of the earth."

In 1960, Beston gave the Fo'castle to the Audubon Society, which rented it out summers to members until it was destroyed in the blizzard of 1978—a historic northeaster that all of us who lived in Massachusetts at the time remember well.  The Henry Beston Society plans to construct a replica of the cabin in its future museum.