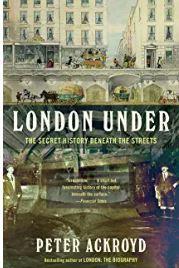 The book opens with some general comments on our many and varied associations with the underworld: terror and superstition, but also shelter and fantasy, criminality, excrement, and, of course, death.Ensuing chapters explore buried Roman ruins and waterways, sewers, tunnels, transport, pipes, and art.  The discussions are variously historical, geological, technological, cultural, and lightly philosophical.

One of my favorite sections follows the routes of London's thirteen rivers and brooks, which, he says, "still flow…They are buried, but they are not dead."  He dedicates a separate chapter to the Fleet, "the most powerful of all London's buried rivers," with a "history as complex and as varied as that of the city itself."

Another engrossing section focuses on the development of the London Underground, which was proposed as early as the 1830s and first unveiled in 1863, far earlier than I had imagined.  As the author notes, "Charles Dickens and Charles Darwin could both have used the Underground."

Short and breezy, London Under is filled with facts enlivened by anecdotes, quotations from past writers, and old illustrations.  If Ackroyd, wary of that pedestrian "indifference" he has remarked upon, works a bit too hard at times to dramatically perk things up, he nonetheless does unearth (pun intended) a great deal of interesting information as well as cultural lore.

As guide, London Under supports an atypical tour of London.  Light enough to carry on a walk, the book enables the traveler to check out certain hidden tunnel entryways, track the "ghost stations" on the Underground, follow the streams of hidden rivers, and even, at a particular grating on the corner of Warner Street and Ray street—"if you put your ear close to it"—hear the powerful Fleet river still flowing underneath.