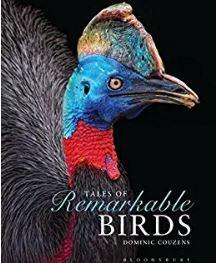 In this beautifully illustrated book, the naturalist and bird guide Dominic Couzens takes readers on a world tour of some fascinating avian lives.  It is, he says, a "small taster for a great feast."  So many birds, so many extraordinary traits!

But selecting for geographic breadth, a wide range of behaviors, and his own preferences (he likes handsome birds), Couzens has chosen well.  Some of the birds are familiar, some are obscure, but all, in the author's concise and engaging descriptions, offer surprise.

Black-capped chickadees, for example, are certainly familiar in North American yards.  But I had no idea that their extraordinary spatial memory enables them to recall not only the hundreds of sites where they have stored their seeds and nuts but even the locations of seeds and nuts they encountered but didn't pick up.  And they remember these sites for at least a month.

The flying capabilities of the Albatross are well-known, but I was astonished to learn that they can circumnavigate the globe with ease.  And while the intelligence of crows has long been established, it's remarkable that the New Caledonian Crow of the Southwest Pacific not only fashions tools for specific uses but seems to pass along tool-making techniques and modifications through populations and generations.

These of course are the achievements Couzens relates with admiration.  Other stories reveal more unsavory aspects of bird behavior, such as the brood parasitism of the Straw-tailed Whydah of Africa, who mimic the songs of the Purple Grenadiers and lay eggs in the latters' nests.

Couzens's point is not to pass judgment on these avian stalkers but to explore the curious relationship.  "Why have they evolved such a complete and complex fabric of behaviour just to ensure that their lives entwine with the host?" he asks.  "And, more pertinently, why don't they just build a nest for themselves?"

As the author emphasizes throughout, there is a great deal about bird behavior that we don't understand.  The display of the Blue Bird-of-Paradise, for instance, which is magnificent—and performed upside down!  Or the Swiftlets of Asia, who catch their insect prey by day mainly through their superbly acute vision, but breed and roost in caves or tunnels, worlds of total darkness, orientating by echolocation.

Couzens concludes his "celebration of bird behaviour around the world" with a brief discussion of extinctions, focusing on Hawaii, where, he says, the forests "have had their heart ripped out."  With bird populations experiencing steep declines around the world, this book is a vivid reminder of the beauty and great diversity of life that we stand to lose.