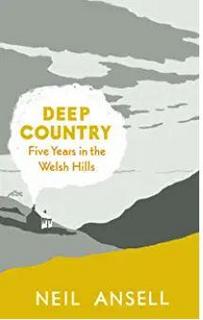 For most of the book, we accompany Ansell on his daily rounds and he is such a good storyteller that I found myself engrossed in the details of his life—his walks to his postbox, or to get wood, or to check on his 120 bird boxes, one of the research projects he took on each year.  And his storytelling encompasses the wildlife he sees, especially the diverse population of birds—goosanders, goshawks, redstarts, woodpeckers, owls—who become his main company.  He so focuses his attention on them as they go about their lives—hunting, eating, displaying, mating—that the stories become solely theirs.

This outward-looking viewpoint is one of the remarkable and surprising aspects of the book.  You might imagine, he says, that all this time on his own would lead to self-examination.  But this was not the case. "Solitude did not breed introspection, quite the reverse," he says. "My days were spent outside, immersed in nature, watching…I certainly learned to be at ease with myself ...but it was not by knowing myself better—it was by forgetting I was there.  I had become a part of the landscape, a stone."

Ansell's vivid descriptions made me long for photographs, and I recommend a YouTube video Ansell made for this excellent book, which offers at least a glimpse of the cottage and surrounding Welsh landscape that he made so fully his own.