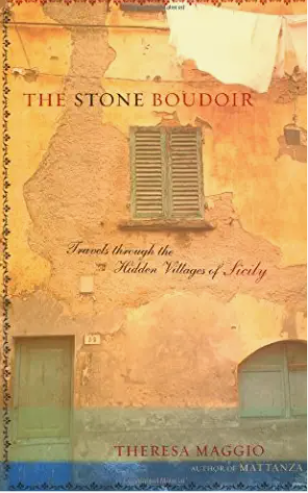 The Stone Boudoir: Travels through the Hidden Villages of Sicily

"Something thrums in the stones of Sicilian hill towns, and I have become obsessed with them," writes Theresa Maggio in her colorful and very personal guide through this distinctive part of Italy.

Maggio's paternal grandparents were Sicilian, emigrating early in the twentieth century from the town of Santa Margherita, which was destroyed in the earthquake of 1965.  Although her grandmother refused to return to the village, claiming "There's nothing there," Maggio decided to see Sicily for herself, visiting while in college, and again, later, with her father, as well as on various vacations.  Watching "The Star Maker," by the Sicilian director Giuseppe Tornatore—who also made the Academy Award-winning movie "Nuovo Cinema Paradiso"—she was captivated by Sicily's stone villages, and in 1992, she finally had the time and money to explore them.

Blending description, history, anecdotes, and her own experiences, Maggio takes us from town to town, focusing both on place and on people.  It is a leisurely journey, its style well-suited to these quiet villages.  Despite the book's subtitle, they are not really "hidden"—travelers know that little remains truly hidden these days.  Arriving in Castiglione, Maggio thinks she has found a "lost village," only to discover, hanging on a restaurant wall, autographed photographs of Harvey Keitel, who spent a month in the town while making a film.  Still, the towns she visits are hardly tourist attractions: they are small, insular, inhabited largely by older people, and still tied to older customs.  And each has its own character.

Maggio explores the cave dwellings in Sperlinga; she visits the farms around Mt. Etna, where people must deal with the still-active volcano; she participates in Catania's long, dramatic religious procession, the Feast of St. Agatha; and in Santa Margherita, she shares a woman's first-hand account of the 1965 earthquake.

She introduces us to a bagpiper—it turns out that bagpiping is an old Sicilian custom(who knew?); to a woman struggling to succeed on her own in business in a deeply sexist culture; and to a stone-worker who, after many years, found his talent and success and now dreams of "a death worthy of the stones."

For Maggio, the stories always return to the stones.  "Here the bedrock hums with hidden energy," she writes.  "Sicilians use it to build their houses, churches, and streets.  Their lives saturate the rock, carving niches, and pooling in the voids."  Of her beloved town, Polizzi Generosa ("so high, so serene, so alone"), where she rents an apartment on the edge of a cliff, she says, "These streets were so close and intimate that I felt I'd walked into someone's stone boudoir."

Maggio's experience of the Sicilian villages is so visual, it's a shame that no photos accompany the book.  But I am hoping to watch "The Star Maker," the movie that lured Maggio to these towns, so I can see them for myself.